(July 19, 2021) Ireland is now officially open to visitors from the United States, Canada and other countries around the world. This announcement is good news for North Americans who have been waiting to revisit Ireland; many of them consider Ireland to be one of their favorite destinations.  Tourism Ireland CEO Niall Gibbons welcomed the news, saying, "The tourism industry right across the island of Ireland is very much looking forward to welcoming back visitors from the U.S. and we will ensure they enjoy their visit." The process for validating a traveler’s vaccination is as follows, according to Tourism Ireland:   “U.S. visitors traveling to Ireland are required to complete a Passenger Locator Form . The form will be checked prior to departure to Ireland by the relevant air carrier and visitors may be asked to provide the vaccination certificate indicated on their form. On arrival in Ireland, spot checks will be carried out on proof of vaccinations and negative RT-PCR
Post a Comment
Read more 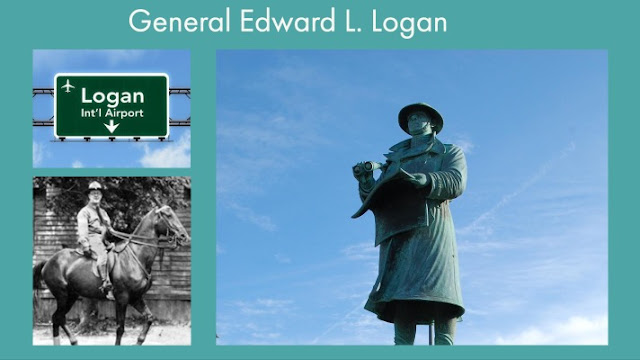 General Edward L. Logan (1875-1939), namesake of Boston’s Logan International Airport , died on July 6 1939 from a sudden 'heart ailment.'  His brother, Reverend Leo J. Logan, presided over the funeral mass at the Gate of Heaven Church in South Boston, with tributes by leading politicians like Senator David I. Walsh , former Massachusetts Governor and Boston Mayor James M. Curley and former Mayor John F. Fitzgerald .  Logan is buried at the Calvary Cemetery in West Roxbury.  A first generation Irish-American, military leader, civic leader and municipal judge with family roots in Galway and South Boston,  Edward was the oldest of nine children of Lawrence and Catherine (O’Connor), according to Michael Cummings of Milton, an expert on the Logan Family. Edward’s father Lawrence immigrated to Boston from Ballygar, County Galway, in 1858, and became a successful businessman at a young age when he became president of the Boston Brewing Company in South Boston.  The family resided a
Post a Comment
Read more 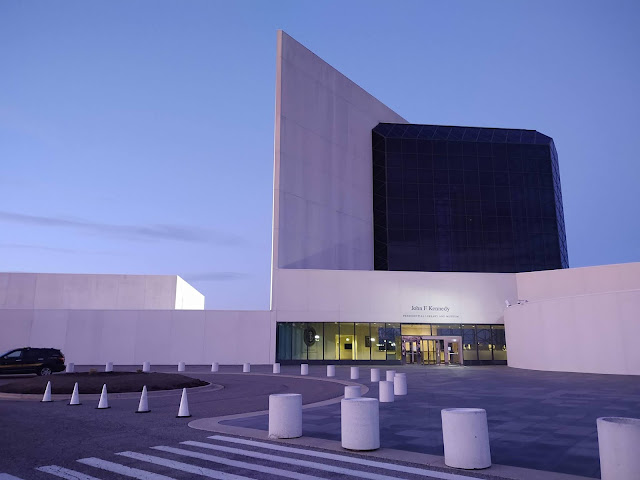 The John F. Kennedy Presidential Library and Museum  in Boston has reopened to the public on Saturdays and Sundays, officials announced over the July 4th weekend.   The Museum will be open from 10 a.m. to 2 p.m. and tickets must be reserved in advance   online .  According to a statement by library officials, "In appreciation of the significant sacrifices that were made by everyone over the past year to keep people safe, admission to the Museum will be free in July and August." Tickets will be marked for a specific time to enter the Museum. Visitors must enter the Museum at the time marked on their ticket. The last timed entry available each day will be at 12:45 p.m.   COVID-19 safety guidelines remain in place for JFK Library visitors.    The JFK Library will not require masks for fully vaccinated individuals, but will require not-fully vaccinated individuals to wear a mask while in the building.  Visitors are required to provide contact information when they check in to t
Post a Comment
Read more 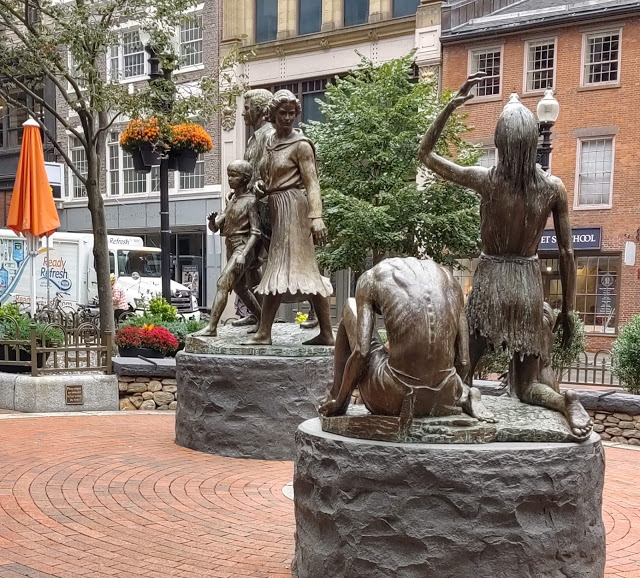 The  Boston Irish Famine Memorial  was unveiled on Sunday, June 28, 1998, before 7,000 people, including the governor of Massachusetts, mayor of Boston and government officials from Ireland.   A Vietnamese and Rwandan were among the speakers of the day, an acknowledgment of modern day refugees who continue to seek solace in Boston. The effort was led by Irish immigrant and businessman Thomas J. Flatley , whose committee included representatives from Boston's Irish community, artist community and from academia.   The Memorial by artist  Robert Shure  juxtaposes an Irish family starving in Ireland with another Irish family striving for success in America.   Eight narrative plaques encircling the statues tell the story of the famine and the Irish triumph in America. The $1 million memorial park commemorates the 150 th  anniversary of the Irish Famine (1845-49), during which one million people died of starvation or disease and nearly two million fled Ireland to avoid death.  Over 100
Post a Comment
Read more 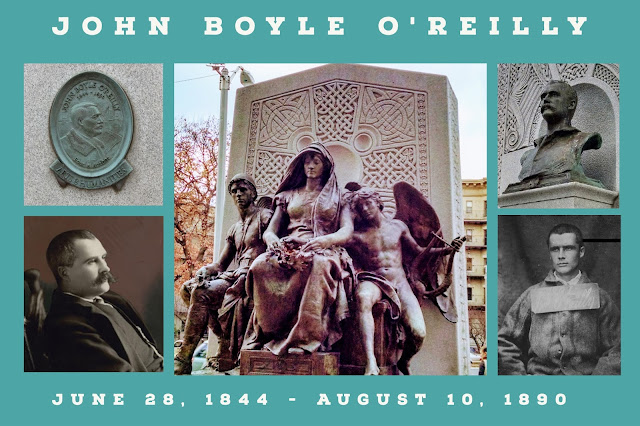 John Boyle O'Reilly , considered one of Boston’s true leaders in speaking, writing and campaigning for human rights, oppressed people and injustice, was born on June 28, 1844 in County Meath, Ireland.  Conscripted into the British Army as a young man, O'Reilly was charged with sedition against the British Crown and sentenced to life imprisonment in an Australian penal colony.  O’Reilly made a daring escape aboard a New Bedford whaler,  Catalpa , in 1868, a feat that helped shape his legend by the time he landed in America.   When he arrived in Boston in 1870, he was infatuated by the possibilities of democracy and liberty.   He spent the next twenty years of his life, until his death in 1890, speaking out on behalf of Irish, Blacks, Native Americans, Jews, Chinese and other beleaguered groups trying to make their way in America. As editor and then owner of  The Pilot ,  the leading Irish Catholic paper in America, O’Reilly used the paper as a bully pulpit to advance various c
Post a Comment
Read more 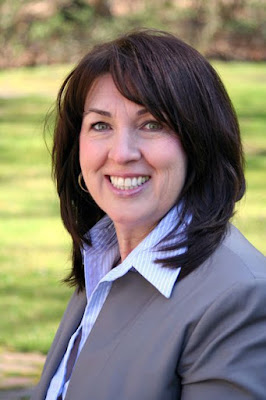 Today, the White House announced its intent to nominate 17 individuals to serve in key roles. Among the nominees is Massachusetts State Representative Claire D. Cronin , President Joe Biden ’s choice for Ambassador Extraordinary and Plenipotentiary to Ireland.  “I am deeply honored to be nominated by President Biden for ambassador to Ireland, especially given the President’s and my own Irish roots,” Cronin said in a statement released by the White House Wednesday. “If confirmed, I look forward to serving as ambassador and working with our partners in Ireland on both the challenges and opportunities ahead of us.”  Cronin, whose maiden name is McLaughlin, has represented the Eleventh Plymouth District since November, 2012. A graduate of Stonehill College and Suffolk University Law School, Cronin is admitted to the Massachusetts bar and is also admitted to practice in U.S. District Court and the U.S. Supreme Court. Cronin is the first woman nominated for the Irish diplomatic post sinc
Post a Comment
Read more

James Joyce's Bloomsday Celebrated in Ireland, Massachusetts and Around the World on June 16 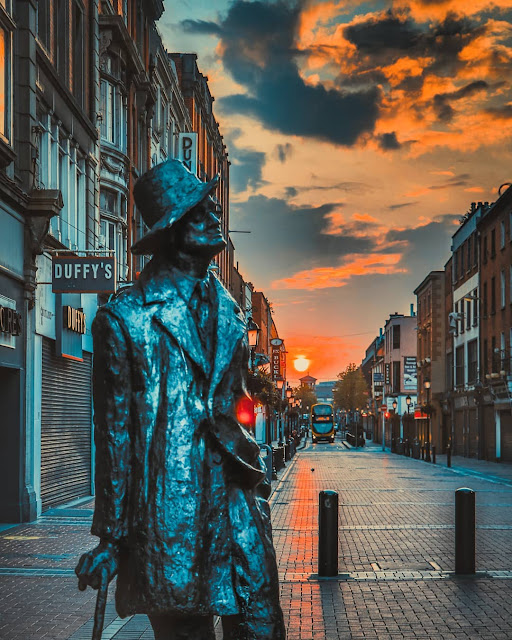 Statue of James Joyce in Dublin, courtesy of Tourism Ireland Bloomsday is a literary celebration held every June 16 in countries, cities, pubs and college campuses around the world. It is a tribute to Irish writer, James Joyce’s (1882 – 1941) and his novel Ulysses. First published in 1922 Ulysses follows the movements of the novel’s main character, Leopold Bloom, through a single day on June 16th, 1904, as he roams through Dublin, Ireland.   Here are some local resources for celebrating Bloomsday 2021 in Massachusetts, Ireland and online.  June 16  Bloomsday 2021: An Online Literary Festival  The Literacy Project in Greenfield, Massachusetts celebrates Bloomsday with Irish music and dramatic readings. Led by harpist Rosemary Caine, the music features Carolan tunes and classic Irish melodies on violins, flute and tin whistle, bodhran and guitar, plus dramatic readings by Michael Haley and by The Wilde Irish Women. In lieu of a cover charge, the Literary Project is gratefully accepti
Post a Comment
Read more
More posts