Showing posts from May, 2018
Show all

Boston Mayor Walsh Being Honored in Galway, Ireland May 11-14 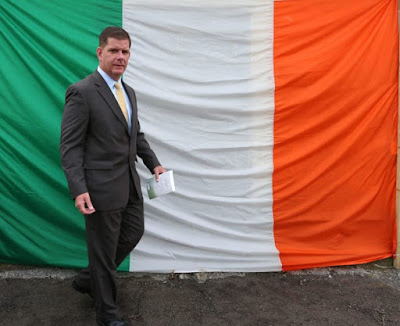 Boston Mayor Martin J. Walsh is visiting Ireland this month to meet with Irish officials and to reaffirm “ Boston ’s important economical and cultural ties to Ireland .” In addition, Walsh will receive several ceremonial awards, including the unveiling of the Kilkerrin Rock in Galway . In a press statement issued by his office, Walsh says, " Ireland and the Irish culture hold a special place in my heart, and are a large part of Boston 's overall identity as well.   Our economic and cultural ties to Ireland are undeniable, and it's beneficial for Boston to continue to embrace, support and learn from other countries and cities. I'm honored that our work in Boston is being acknowledged overseas." Among the highlights of the trip: Friday, May 11: Mayor Walsh Receives the "Freedom Of The City" Award The "Freedom of the City" is a ceremonial award, given by a local government to those who have served in an exceptional c
Post a Comment
Read more
More posts