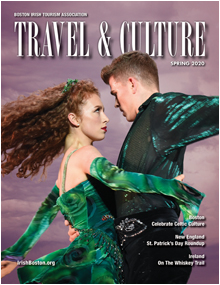 BOSTON) -- The Boston Irish Tourism Association (BITA) has issued its 2020 annual spring issue of Travel & Culture magazine, a compendium of Irish concerts, culinary, cultural and literary activities taking place in Massachusetts and throughout New England this spring, as well as travel tips for visiting Ireland this year.

The magazine is distributed free at visitor kiosks and cultural venues throughout Massachusetts and is available in digital format online on BITA’s home page.

This issue has feature stories on St. Patrick’s Day activities, including parades, concerts, dance shows, literary and theatrical productions, culinary and other cultural celebrations. Among the top Irish shows profiled this season: Riverdance, A Celtic Sojourn, Celtic Woman, the High Kings, Cherish the Ladies, Lunasa and Cherish the Ladies.

Stories on local organizations include the 20th Annual Irish Film Festival Boston which focuses on women in films this year. Other profiles include the Irish Cultural Centre of New England and two Rhode Island destinations, Newport and the Blackstone River Theatre in Cumberland.

Travel & Culture’s Ireland section has feature stories on Galway, the 2020 European Union Cultural Capital, and details on the growing popularity of Irish Whiskey among North Americans visiting Ireland. In addition, a schedule of popular group tours to Ireland is included.

A map of the Boston’s Irish Heritage Trail, which celebrates its 26th season in 2020, includes descriptions of the 20 downtown and Back Bay sites along the trail.

BITA is celebrating its 20th anniversary as a year-round, cultural tourism organization that promotes the state’s largest ethnic community. The US Census reports that nearly 24% of all Massachusetts residents claim Irish ancestry.

For further details on festivals and concerts, as well as year-round Irish and cultural activities, hotel packages, gift shops and more, visit IrishMassachusetts.com.
Posted by irishboston.blogspot.com at 7:40 AM No comments: 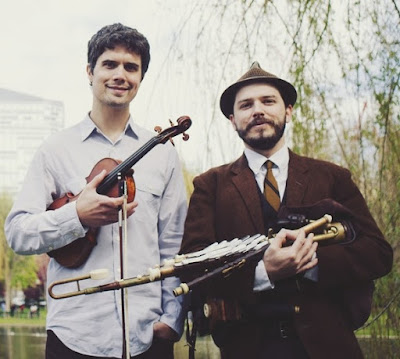 The Irish Cultural Centre of New England is presenting a Ceili for Leap Year with top Irish traditional musicians at 8 p.m. on Saturday, February 29, 2020.

Opened in 1999, the Irish Cultural Centre is a year round facility on 46 acres, offering music and dance, theater and literary activities, educational courses and social activities.  Learn more about the ICC.

Find year round details on Irish cultural activities at IrishMassachusetts.com.

Posted by irishboston.blogspot.com at 6:59 AM No comments:

Rian (Ree-Ann), the Irish word for path, honors the groups Irish roots while reflecting its inclusive mission of empowering immigrant and refugee families on the path to opportunity, safety and a better future for all.

The Center’s new logo is inspired by the Giant's Causeway on the north coast of Ireland, natural hexagonal stones formed 60 million years ago by cooling lava. The symbol represents how the Rian Immigrant Center provides the support to chart a pathway forward.

“Our work has never been in higher demand,” said Ronnie Millar, executive director of the Rian Immigrant Center. “In recent years that path has grown more difficult. Legal obstacles, bureaucratic thickets, even physical barriers obstruct the path to legal status and citizenship. Together with our public and private partners, we are undaunted in navigating those challenges, and we remain steadfast in creating pathways to new beginnings.”

The organization was formed in 1989 as the Irish Immigration Center, working out of a basement apartment in Dorchester, during a time when there were many undocumented Irish living in greater Boston.  Under the leadership of Sr. Lena Deevy, Patrick O’Riordan and others, the ICC set up workshops on citizenship and health care and offered counseling and other services the new Irish needed.

Over time, the Irish Immigration Center expanded its mission to help not just the Irish but immigrants from other parts of the world and changed its named to the Irish International Immigrant Center.

Additionally, Rian is continuing to expand its partnerships with local schools, hospitals, community-based organizations and recently launched a new civic engagement program for those on the path to citizenship.

Rian’s work creating pathways to new beginnings is made possible by its many individual donors, corporate donors, foundational donors and partners in addition to its hard-working and dedicated staff and volunteers.

For more information about Rian and how to get involved, please visit www.riancenter.org.

Posted by irishboston.blogspot.com at 2:42 PM No comments:

The Rev. James T. O’Reilly OSA Division 8 Ancient Order of Hibernians in Lawrence, Massachusetts has announced the recipients of the 2020 Awards.

The Rev. Christopher J. Casey has been chosen as the 2020 recipient of the Richard Cardinal Cushing Award.  He is a native Lawrencian and was ordained at Holy Cross Cathedral in 2007 by Sean Cardinal O'Malley.

The Richard Cardinal Cushing Award was established in 1974, and named for the legendary Archbishop of the Boston Archdiocese.   For the past 46 years this award has been presented to an individual in the Greater Lawrence area who emulate the characteristics of this beloved prelate.

These two awards are being presented at the 149th Annual Saint Patrick’s Day Dinner Dance on Saturday, March 7, 2020.

Larry F. Giordano is receiving the Hon. John E. Fenton Citizenship Award.  A foster child himself, Larry founded Foster Kids of the Merrimack Valley fifteen years ago to help support foster children and help them to be the best they can be. The Fenton award is being given to Larry at Division 8’s 51st Annual Saint Patrick Day Luncheon on Friday, March 13.

Find more information about the AOH, Division 8 of Lawrence, including the Irish Heritage Month taking place each March in Lawrence, MA.

Here is information on AOH State Board of Massachusetts.

Posted by irishboston.blogspot.com at 4:27 PM No comments: 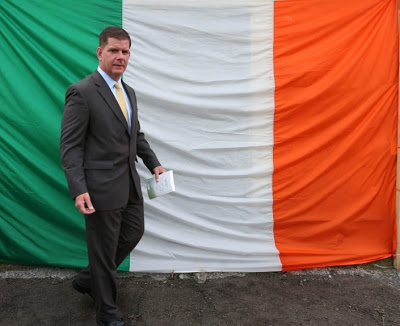 Boston Mayor Marty Walsh received the prestigious Ambassador Award, presented annually by the St. Patrick’s Committee of Holyoke.  The award recognizes a person who has worked to promote the relationship between the people of the Republic of Ireland and the people of the United States.

Read more about Marty Walsh and his Irish roots here.

Ireland’s Ambassador to the United States Daniel Mulhall was present for the award ceremony at Boston City Hall.

The Holyoke St. Patrick’s Parade, recognized as one of the nation’s finest Irish celebrations is being held on Sunday, March 22.

Posted by irishboston.blogspot.com at 2:14 PM No comments: 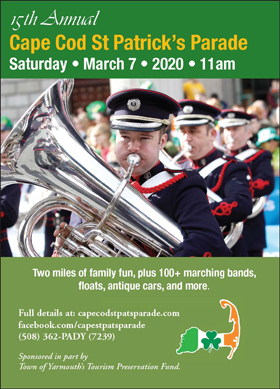 The Cape Cod St. Patrick’s Parade celebrates its 15th anniversary as it steps off at 11 a.m. on Saturday, March 7, 2020.  The two mile parade begins at Bass River Sports World at Long Pond Road and Route 28 in South Yarmouth and proceeds down Route 28, ending at the Town and Country Motor Lodge in West Yarmouth. 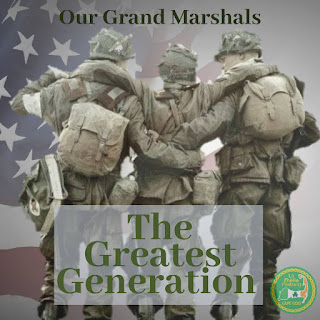 This year's Grand Marshals are World War II veterans who will lead the parade. They join a distinguished lineage of past grand marshals that have included Bruins legends Bobby Orr and Terry O'Reilly, Boston Mayor and US Ambassador Ray Flynn, boxing champ Irish Micky Ward and singer Siobhan Magnus.

"From humble beginnings to today, we have been blessed with growth, achievement and support,” says Chairman Des Keogh, who thanked the spectators who brave the elements each year as well as the countless volunteers, local businesses, participating bands and the committee.
The parade includes dozens of marching bands and pipe bands, including the renowned Boston Police Gaelic Column of Pipes and Drums.

For information about visiting Cape Cod any time of year, check out the Cape Cod Chamber.

Posted by irishboston.blogspot.com at 10:39 AM No comments: