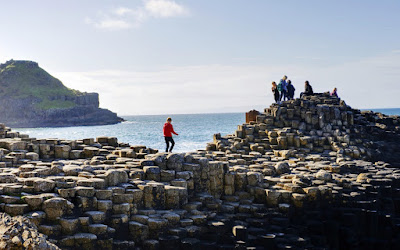 Tourism Ireland's Advertising Campaign kicks off in the USA today with this 30 second video airing on NBC, CBS and ABC, in the New York, Boston, Philadelphia and Chicago markets. The ad airs around major entertainment shows such as Jimmy Kimmel Live, The Tonight Show, Blue Bloods, the Late Late Show with James Corden and the Kennedy Center Awards.

"Welcome to Ireland. It's not just something we say when you arrive. The warmth of an Irish welcome stays with you long after you leave. So come on over! We'll give you the inside track and let you into some little secrets that will take you back through history, bring our landscapes to life and make your evenings last longer. Welcome to Ireland!"

Here are more stories about traveling to Ireland from New England.

Posted by irishboston.blogspot.com at 8:08 PM No comments: Links to this post

Tourism Ireland has a brand new video with Mark Hamill advising everyone to ‘escape the dark side along Earth’s  - it's the perfect place to get away from it all’.

The video is now live across all Tourism  markets promoting  around the globe.

See more stories about traveling to Ireland from Massachusetts and New England.

Posted by irishboston.blogspot.com at 6:55 PM No comments: Links to this post

A Christmas Celtic Sojourn with Brian O’Donovan sparkles with masterful music, spellbinding stories and dazzling dancing. It evokes emotions of Christmas memories that stretch back generations. It inspires audiences throughout  to embrace tradition, spirituality and community.

Enter to Win Tickets here and follow the directions.

Or, you can purchase tickets online now to these or other shows, to ensure you get to see one of the magical shows this Christmas holiday.

Find year round details on Irish cultural activities in New England by visiting IrishMassachusetts.com.
Posted by irishboston.blogspot.com at 9:52 AM No comments: Links to this post 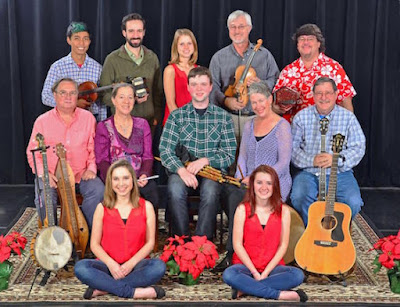 Blackstone River Theatre's 10th annual Christmas Celebration takes place on Sunday, December 10,  2017, with shows at 2 p.m. and 7 p.m.  Tickets are $22 and can be purchased at the venue.

"That's one of the nicest thing about this show," explains Russell Gusetti, BRT executive director. "We all get a chance to perform with each other in several different configurations, something audiences simply do not get to see at any other point in the year.”

Here is a schedule of upcoming events at Blackstone River Theatre.

For year round details on cultural events in New England visit IrishMassachusetts.com.

Posted by irishboston.blogspot.com at 2:25 PM No comments: Links to this post 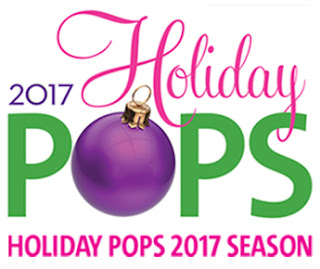 The acclaimed Boston Holiday Pops season opens at Boston Symphony Hall on Tuesday, December 5, and runs from December 5 through December 31 with 40 evening and matinee performances.

Maestro Keith Lockhart and the Boston Pops Orchestra are joined by the Tanglewood Festival Chorus, conducted by James Burton.  And Santa Claus & Mrs. Claus make an appearance at each performance.

Lockhart, who is celebrating his 23 season as conductor, is carrying on a tradition that began in December 1973 by esteemed Conductor Arthur Fiedler.

Boston Symphony Hall itself is a big part of the Holiday Pops experience, specifically decorated to evoke all the magic and charm of the season.  Pops patrons sit at cabaret-style tables and order food and drink with family and friends.

The final show of the year takes place on December 31, New Year’s Eve, when jazz conductor Bo Winiker leads the Boston Pops Swing Orchestra along with his brother Bill Winiker and the Winiker Swing Orchestra.  It’s a perfect way to ring out the old and ring in the new, as the Boston Pops continues its fine Holiday Pops tradition for yet another season.

This year's Boston Holiday Pops was named Event of the Week by the Boston Irish Tourism Association.

Posted by irishboston.blogspot.com at 6:02 PM No comments: Links to this post 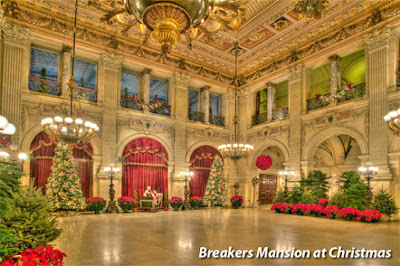 Enjoy hundreds of cultural, culinary, historical and seasonal events at the 47th Annual Christmas in Newport celebration in Rhode Island this month.

Tours of the great mansions, holiday caroling, children's activities, visits with Santa, concerts and dance recitals are available throughout December.

Overseas visitors now have easy access to Newport thanks to the new Norwegian Air  flights operating out of T.F. Green Airport in nearby Providence.  These flights connect Rhode Island to European cities like Dublin, Shannon, Cork, Belfast and Edinburgh.

As part of the community spirit to make this a singular occasion each year, only clear bulbs illuminate the scenic harbor and wharves, the restored colonials of the Point and Historic Hill sections, and the Victorian splendor of .

For specific information, call the Christmas in Newport hot line at  (401) 849-6454, or email at info@christmasinnewport.org

For information about lodging, restaurants and year round things to do in Newport, visit Discover Newport.
Posted by irishboston.blogspot.com at 2:54 PM No comments: Links to this post 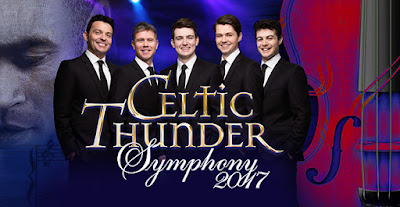 Celtic Thunder, the popular Irish quintet featured on PBS, is performing its Symphony Tour at the Lynn Memorial Auditorium at 7 p.m. on Sunday, December 3, 2017.

This is Celtic Thunder's 10th tour of the since it was launched in 2008. The five male soloists - Damian McGinty, Ryan Kelly, Emmet Cahill, Neil Byrne & Michael O’Dwyer - perform solo and ensemble numbers.

See other shows at Lynn Auditorium, including The Tenors on December 21 and The Chieftains on March 18, 2018.

Posted by irishboston.blogspot.com at 10:30 AM No comments: Links to this post

You can purchase tickets online or at the venue, located at One Canal Street in Boston's North End.

The show was developed by Nashville musician and Celtic music fan Ric Blair, and is currently airing on 222 PBS stations across America.  It combines classic Christmas melodies like "Little Drummer Boy" and "I'll Be Home for Christmas" with ancient Celtic melodies on traditional instruments like the fiddle, uilleann pipes, tin whistle and bodhran.  Read more about the band here.

For year round details on Irish and Celtic cultural activities in Massachusetts and New England, visit IrishMassachusetts.com.

Posted by irishboston.blogspot.com at 7:14 PM No comments: Links to this post 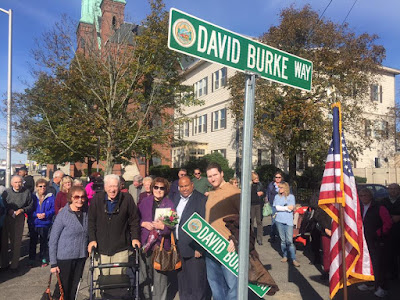 The Burke Family with Mayor Rivera

On November 4, the City of Lawrence unveiled a special street sign honoring the late David R. Burke (1940-2009), a civic and community leader in Lawrence as well as an nationally recognized leader in the Irish-American community.

Mayor Dan Rivera joined Dave's family and friends for the dedication, near St. Patrick's Church where Dave was a parishioner and across the street from where Dave ran a successful gift shop called Irish Jaunting Car for many years.

Dave's wife Pat Burke and son Kevin spoke about Dave's love of Lawrence and his commitment to making the city a better place for everyone.  Bill Sullivan, president of AOH Division 8 and longtime friend and colleague of the Burkes, recalled Dave's influence on the national and world stage as a thoughtful and committed leader on the issue of Northern Ireland's peace process.

Read In Memoriam on Dave Burke.

Mayor Rivera presented a Proclamation issued“to posthumously honor Dave Burke for his lifelong commitment and significant impact to the community…we thank him for making better.”


The proclamation also praised Burke for dedicating “his life to the service of others” on behalf of ’s International Institute, the Immigration City Archives, , Lawrence Cultural Alliance, North of Boston Convention & Visitors Bureau, Merrimack Chamber of Commerce and Lawrence Public Library.

See Full copy of Proclamation below. 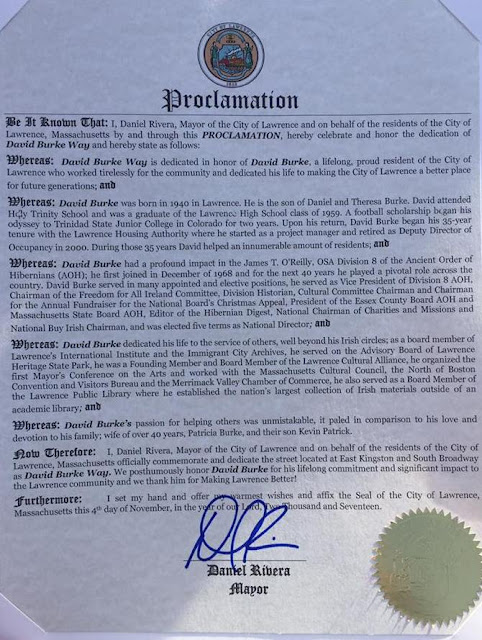 Posted by irishboston.blogspot.com at 1:42 PM No comments: Links to this post