Showing posts from August, 2009
Show all

BY THE PRESIDENT OF THE UNITED STATES OF AMERICA A PROCLAMATION Senator Edward M. Kennedy was not only one of the greatestsenators of our time, but one of the most accomplished Americansever to serve our democracy. Over the past half-century, nearlyevery major piece of legislation that has advanced the civilrights, health, and economic well-being of the American peoplebore his name and resulted from his efforts. With his passing,an important chapter in our American story has come to an end. As a mark of respect for the memory of Senator Edward M.Kennedy, I hereby order, by the authority vested in me by theConstitution and laws of the United States of America, thatthe flag of the United States shall be flown at half-staff atthe White House and upon all public buildings and grounds, atall military posts and naval stations, and on all naval vesselsof the Federal Government in the District of Columbia andthroughout the United States and its Territories and possessionsuntil sunset on A
Post a Comment
Read more 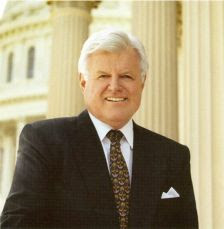 Senator Ted Kennedy was a great champion of Massachusetts, the place he called home. When we started the Boston Irish Tourism Association in 2000, he sent a Welcome Message for visitors coming to the state that was good humored and lighthearted, but his pride and love for Massachusetts was clear. Here are some comments below from Massachusetts officials and groups that have worked with and admired Senator Kennedy for his great contributions to our state and nation. Governor Deval Patrick : "One of the Commonwealth's brightest lights went out last night. Ted Kennedy was a compassionate, effective, visionary statesman, family man and friend. Diane and I were blessed by his company, support and many kindnesses, and miss him profoundly. We pray for comfort for his beloved wife and partner Vicki and his entire family." Lt. Governor Tim Murray : "This is a profound loss for our Commonwealth, our country, and people around the world who have had Senator Kennedy as
Post a Comment
Read more

(WORCESTER, Mass., August 13, 2009)-The Worcester Hibernian Cultural Foundation will host the Fallon Community Health Plan Canal Diggers 5K Road Race on Sunday, September 13. The race begins at 11AM from the Centre’s Fiddler’s Green Irish Pub on 19 Temple Street and will end at Harding Street, underneath which runs Blackstone Canal. The race is under the direction of Paul Collyer of BAEvents.Com, a well-known and experienced race director. Registration, which can be completed via the race’s website, http://www.canaldiggers.com/ , has a fee of $20 on or before September 5th and $22 afterwards. The day’s festivities will include live music provided by Irish music headliners “The Brennan Brothers”, an Irish BBQ, and a multitude of refreshments for the runners after the race. Festivities will span into the night as a traditional Irish Seisiun runs from 4 PM to 8 PM inside the Fiddler’s Green pub. “We are expecting a record number of runners for our third race.” states event Co-Chair Pa
Post a Comment
Read more

RESTAURANT WEEK IN BOSTON -- FINE DINING IN A BEAUTIFUL CITY

Boston’s semi-annual Restaurant Week is upon us, and there’s no better way to enjoy the city’s hospitality at its finest than by sitting down to a meal. This year Restaurant Week in Boston runs from August 9-14 and 16-21, and over 200 restaurants are participating, according to Patrick Moscaritolo, head of the Greater Boston Convention & Visitors Bureau, which organizes the event. Moscaritolo says it’s a chance for the city’s best chefs “to get creative and showcase seasonal New England ingredients, farm fresh herbs and produce, and local seafood all at a tremendous value to diners. It’s also the perfect time to enjoy the region’s outdoor cafes, patios and harborside dining.” A number of hotel restaurants from the Boston Irish Tourism Association are participating this year, listed below. Check them out if you’re in town during Restaurant Week Boston. Aura Restaurant at Seaport Hotel Boston Avenue One Hyatt at Regency Hotel Boston Café Fleuri at Langham Hotel Clink at Libe
1 comment
Read more
More posts