Showing posts from October, 2016
Show all

The Boston Irish Reporter , a monthly newspaper dedicated to the Irish community in greater Boston, is holding its annual luncheon to honor local leaders at the Seaport Boston Hotel on Friday, October 28, 2016. Among the honorees this year are Paul Kirk, Jr., former US Senator who succeed Senator Edward M. Kennedy , and former chairman of the Democratic National Committee; the Leary Family - Joe, Kevin, Mary and Elizabeth -  who have supported Ireland through the American Irish Partnership for many years; and Jim and Mary (Cahill) Judge, who are being honored for their excellence in business and philanthropy. For tickets to the luncheon, please call 617 436-1222 or email bostonirishhonors@bostonirish.com. Congratulations to the winners.
Post a Comment
Read more

The Boston chapter of Comhaltas Ceoltoiri Eireann  (CEE Boston) is celebrating its 40 th anniversary from 1-6 p.m. on Sunday, October 24, 2016 at the Irish Cultural Centre in Canton . Admission is free but donations are accepted at the door. The festivities included continuous music by the CCE Boston Ceili Band and other special guests, along with set dancing and step dancing. The Boston chapter was launched in 1975 by Irish fiddler Larry Reynolds , accordionist Billy Caples, radio host John Curran and Pat and Mary Barry, as a way of preserving Irish traditional music, dance and culture in the New England region. At first the branch activities were held at the VFW Hall in Allston, before moving to the Canadian American Club in Watertown , where activities continue today. Today the Boston chapter is called the Reynolds-Hanafin-Cooley Branch, in honor of three of Boston ’s most important traditional musicians.  Find out more about CCE Boston here .  Rea
Post a Comment
Read more 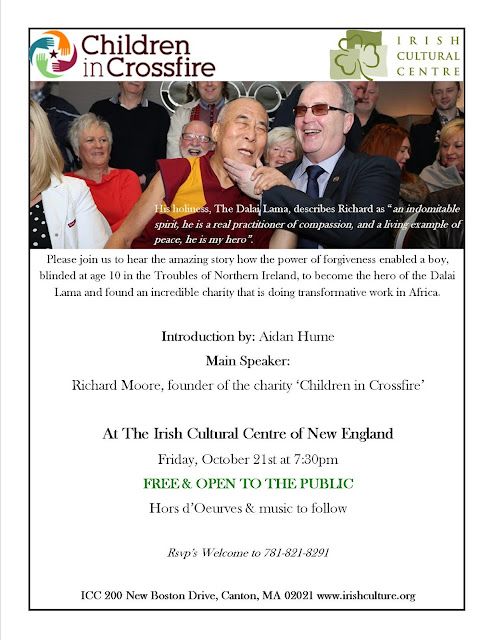 On Friday, October 21, 2016, the Irish Cultural Centre of New England is welcoming Richard Moore, a native of Derry and founder of Children in Crossfire , an international agency that helps children around the world caught in conflict and war. The event takes place at 7:30 p.m. and is free to the public. When Moore was 10 years old, a British soldier fired a rubber bullet from ten feet away, blinding Moore for life.  Rather than harbor bitterness, Moore became a lifelong advocate for compassion and forgiveness. The Dali Lama called Moore, "an indomitable spirit, a real practitioner of compassion, and a living example of peace.  He is my hero."  Children in Crossfire works in Tanzania, Ethiopia, Ireland and the UK, supporting early childhood development, education and children's rights. For year round Irish events in greater Boston, visit IrishBoston.org .
Post a Comment
Read more 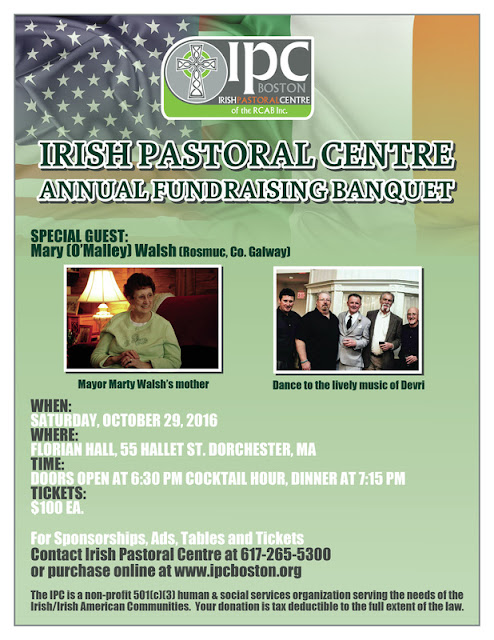 The Irish Pastoral Centre of Boston is honoring Mary Walsh at its annual fundraising banquet, taking place at 6:30 p.m.  on Saturday., October . 29 at Florian Hall in Dorchester.  Mrs. Walsh is the mother of Boston Mayor Martin J. Walsh.  Born in the small Gaelic speaking village of Rosmuc, County Galway, Mary emigrated to the United States in the 1950s, settling in Norwood with relatives.  She met her husband-to-be, John Walsh, at the Intercolonial Dance Hall on Dudley Street in Roxbury.   They married in 1965 and made their home in Dorchester, where they raised their two sons, Martin and John.  Tickets to the annual fundraiser are $100, and can be purchased online .   Sponsorship and advertising opportunitie s are also available.   Popular Irish traditional band Devri is performing.  Since 1987, the Irish Pastoral Centre has been a beacon for generations of Irish immigrants settled in the Boston area.  It provides a variety of spiritual, cultural and social guidance for
Post a Comment
Read more

JFK Library Presents Author Larry Tye to Discuss his book, Bobby Kennedy: The Making of a Liberal Icon, on October 5 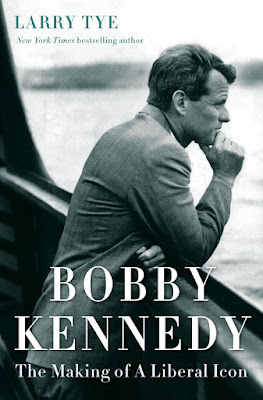 On Wednesday, October 6, 2016, the John F. Kennedy Presidential Library & Museum is presenting award-winning journalist and author  Larry Tye to discuss his new book, Bobby Kennedy: The Making of a Liberal Icon.   Former Boston Globe columnist Eileen McNamara moderates. The conversation takes place from 6:00 to 7:30 p.m. at the Library, and is free to the public.  Registration is suggested. A former Boston Globe reporter, Larry Tye has written several books, including a biography on baseball great Satchel Paige. The event is part of the Kennedy Library Forum , a series of public affairs programs throughout the year that foster public discussion topics of historical, political and cultural relevance to the JFK Library. Find profiles of other Kennedy family members and associations from the Boston Irish Tourism Association. For information about Boston's Irish community, visit IrishBoston.org .
Post a Comment
Read more
More posts