Showing posts from November, 2012
Show all

The Boston Irish Tourism Association has released its holiday issue of Travel & Culture Guide , a free magazine distributed at visitor kiosks, cultural venues, hotels, pubs and tourism spots throughout Massachusetts.  Read the Press Release here . The fall/winter 2012-13 Travel & Culture Guide includes profiles on Brian O’Donovan , radio host and producer of Christmas Celtic Sojourn; Mary McTigue , head of the Irish Cultural Centre in Canton; and Keenan Langlois , executive chef at the Granary Tavern in Boston.   There’s a feature article about the last Kennedy Christmas at the White House in 1962 , Holiday music concerts in New England, a travel piece on Quebec City, and news about Ireland’s The Gathering , a worldwide marketing effort to invite the Irish Diaspora home in 2013.   Here are the stories from this issue . You can pick up a free copy of the Travel & Culture Guide at visitor centers around Massachusetts, at Irish cultural venues and at se
1 comment
Read more

On Monday, November 19, 2012, Caroline Kennedy is presenting the 2012 John F. Kennedy New Frontier Awards to two women whose work reflects the spirit of President Kennedy.   The ceremony takes place from 5:30 to 6:30 p.m. at the John F. Kennedy Presidential Library in Boston. Receiving the awards in 2012 are Stacey Abrams , Minority Leader of the Georgia House of Representatives and the first woman to lead either party in the Georgia General Assembly; and social entrepreneur Veronika Scott , founder of an innovative humanitarian project that hires homeless women in Detroit. The event is free and open to the public, but you must register to attend .  You can watch a live webcast of the awards ceremony starting at 5:30 p.m. Find out more about ongoing l ectures, forums, family activities and award ceremonies at JFK Library .   For year round details on Irish activities in Greater Boston, visit IrishBoston.org For visitor information go to MassVacation.
Post a Comment
Read more 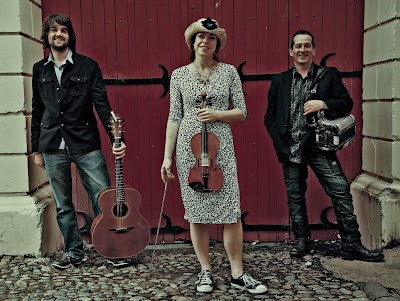 Three great Irish traditional musicians - Mick McCauley , Winnie Horan and Colm O Caoimh - perform together at the Blackstone River Theatre in Cumberland, RI at 7:00 p.m. on Sunday, November 18, 2012.  Tickets are $15 and can be purchased at the door or by calling 401 725-9272. Accordionist McCauley and fiddler Horan are members of the Irish traditional band Solas , while O Caoimh is a noted singer and guitarist.   Here is a schedule of upcoming concerts at Blackstone River Theatre . Find year round information on Irish cultural activities in Massachusetts and the New England states by visiting IrishMassachusetts.com .
Post a Comment
Read more

Mike Scott of the Waterboys at Brighton Music Hall in Boston on Sunday, November 18

Singer, songwriter and author Mike Scott of the Waterboys is coming to Boston's Brighton Music Hall to talk about his memoirs and to sing a few songs on Sunday, November 18, 2012 at 9:00 p.m. The Boston Irish Tourism Association has a pair of tickets to give away to the show.  To enter the contest click here . You can also purchase tickets directly online . Find more BITA concert ticket giveaways for upcoming Irish shows.
Post a Comment
Read more

Singer and songwriter Aoife O'Donovan is performing with the Dave Douglass Quintet at Regattabar Jazz Club in Harvard Square on Thursday, November 15, 2012 at 7:30 and 10:00 p.m. Tickets to the show are $28 and can be purchased online or at the door. O'Donovan , who specializes in Irish, folk and Americana roots music, collaborated with Douglas on his band's newest album Be Still . You can find details about Irish cultural activities in greater Boston by visiting IrishBoston.org , and find out about year round live jazz at MassJazz.com . For visitor information go to MassVacation.com and BostonUSA.com .
Post a Comment
Read more

Micheal O Suilleabhain , noted pianist, composer and educator, is performing on the piano with a string quartet and acclaimed Irish fiddler Seamus Connolly at Boston College on Wednesday, November 14, 2012. The concert, which is part of the Gaelic Roots Irish Music Series , takes place from 7:30 to 9:30 p.m. at the Irish Room in Gasson Hall on BC's Chestnut Hill campus. It is free and open to the public. O Suilleabhain first performed at Boston College in 1990, when he organized an Irish fiddle festival called My Love is in America, which laid the groundwork for the Gaelic Roots program started by Connolly, who is the Sullivan Artist in Residence at the college.  Here is a schedule of Gaelic Roots concerts this fall. For year round information on Irish cultural activities in greater Boston, visit IrishBoston.org.  For visitor information call BostonUSA.com and MassVacation.com .
Post a Comment
Read more

Huntington Theatre Company is presenting Betrayal , by Harold Pinter, at the B.U. Theatre in Boston from November 9 through December 9, 2012. Directed by Maria Aitken , Betrayal has been described as "the  greatest and most moving of Pinter's plays" by the London Telegraph.   For ticket information click here . Here is the complete 2012-13 season at Huntington Theatre Company . For more details on Boston's theatre, music, and cultural scene, visit IrishBoston.org For visitor information go to MassVacation.com and BostonUSA.com .
Post a Comment
Read more

The Script , the newest hit band to come out of Ireland, is performing at the Agganis Arena at Boston University on Friday, November 9, 2012 at 7:30 p.m.  Special guest Tristan Prettyman opens the show. Influenced by U2, Coldplay and Van Morrison, The Script has just released its third album. Tickets can be purchased online or at the venue.   Here's a schedule of upcoming events at the Agganis Arena . Find year round details about Irish cultural events in Massachusetts by visiting IrishMassachusetts.com . For tourism information about visiting, go to BostonUSA.com and MassVacation.com .
Post a Comment
Read more

The Irish Culture Centre in Canton is hosting Tis the Season: A Holiday Marketplace from 10:00 a.m. to 6:00 p.m. on Saturday, November 3, 2012.   The marketplace include gift shops, arts and crafts artisans, Irish and holiday items and more on sale.  The event is free and open to the public. Find out  more about the Irish Cultural Centre .  For year round details on Irish activities in Massachusetts and the region, visit IrishMassachusetts.com . For tourist information go to MassVacation.com and BostonUSA.com .
Post a Comment
Read more

The high energy Highland Rovers Band is returning to the Hibernian Cultural Centre in Worcester on Saturday, November 3, 2012 at 8:00 p.m.  Tickets are available at the door for $10 general admission and $5 for students with I.D. The band, which has toured with the Marshall Tucker Band and other national acts,  fuses popular rock percussive rhythms, bagpipes, fiddle and vocal harmonies to create an intricate and fresh sound. Located at 19 Temple Street in Worcester, the Hibernian Cultural Centre is home to the Ancient Order of Hibernians , men's and women Division 36. Find details on year round Irish cultural activities in Massachusetts and the region by visiting IrishMassachusetts.com . For visitor information go to MassVacation.com and CentralMA.org .
Post a Comment
Read more

The Ancient Order of Hibernians, Division Eight in Lawrence, is hosting Misgivings, A Divine Comedy of Bellylaughts, Blessings, Blarney and Bingo, at Relief's In , One Market Street in South Lawrence, on Friday, November 9, 2012 at 7:30 p.m. Tickets are $20 and proceeds benefit the Children's Christmas Party hosted by AOH Division 8 each year.   In addition to the interactive comedy, other highlights include the O'Shea-Chaplin Irish Dancers , featuring World Champion step dancer Scott Doherty .  John Connors and the Irish Express provide the music. For more information, contact Anne Marie Nyhan-Doherty at 978 794-0911 or Bill Sullivan at 978 682-4875. Find year round details on Irish events in Massachusetts and the region by visiting IrishMassachusetts.com .
Post a Comment
Read more Michael Joyce , who emigrated from Connemara to Boston in 1949 and became an influential advocate of immigration reform at the Massachusetts State House, died in 1989, but he is still remembered fondly by his family and friends. They have come together to create the Michael Joyce Memorial Playground in Marine Park in South Boston, a beautiful tribute to Joyce's life. At the official opening of the park on October 14, 2010,  State Senator Jack Hart of South Boston said, “His family, the many immigrants he helped, and now this playground, are all part of Mike Joyce’s legacy. Children and families for generations will come and enjoy this beautiful park.” On Saturday, November 3, 2012, the Friends of Michael Joyce group is holding a 5K race in South Boston to raise funds for maintenance and improvements to the park. The race begins and ends at Mother's Rest at Carson Beach.  Here's how to register , and you can follow it on Facebook . Shawn Thornton of the Bos
Post a Comment
Read more
More posts