Showing posts from November, 2009
Show all

(Boston) -- The Huntington Theatre Company’s Humanities Forum is presenting Pulitzer-prize winning authors Paula Vogel and Doris Kearns Goodwin on Sunday, December 6 at the Boston University Theatre. Playwright Vogel ( How I Learned to Drive , A Civil War Christmas: An American Musical Celebration ) and Kearns Goodwin ( No Ordinary Time: Franklin and Eleanor Roosevelt, Team of Rivals ) will speak in conversation about the Civil War, President Abraham Lincoln, race in America, and more. The discussion, which is free and open to the public, follows the 2:00 p.m. performance of Vogel’s play, A Civil War Christmas: An American Musical Celebration . Taking place on Christmas Eve 1864, the play features stories by a collection of characters including President Abraham Lincoln and his wife. The stories are woven into an American tapestry, showing that the gladness of one's heart is the greatest gift of all. This production includes holiday music and is enhanced by local choirs caroling
Post a Comment
Read more 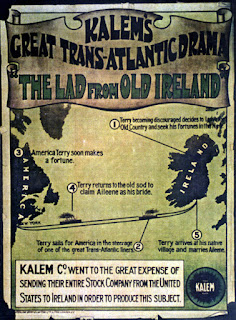 The Boston Irish Film Festival is presenting a fresh new look at early Irish filmmaking with the presentation of Blazing the Trail: The Story of the Kalem Film Company in Ireland. The multimedia event takes place on Monday, November 23, 2009, at the historic Coolidge Corner Theater at 290 Harvard Street in Brookline, MA, from 7:00 to 9:00 p.m. The project was created by film scholar and director Peter Flynn, founder of the Boston Irish Film Festival , and produced by Dawn Morrissey. They will show a selection of rarely-seen films from the early 20th century, as well as several short films that put the historical film in retrospect and modern context. Live music will be interspersed between the films to create an old-time Nickelodeon atmosphere. Musicians are pianist Peter Freisinger and vocalists Victoria Hayes and Liz Hayes. There is also a chance to win free tickets to this premier event through the Boston Irish Tourism Association . Tickets to the show are $9.75 and are availa
1 comment
Read more

Dan Rooney, U.S. Ambassador to Ireland, is being honored at the American Ireland Fund's 28th annual Boston Gala, taking place Thursday, November 12, at the Westin Waterfront Hotel. Ambassador Rooney, owner of the Pittsburgh Steelers co-founded the American Ireland Fund in 1976, at the height of the Troubles in Northern Ireland. Since then the Fund has raised over $300 million to promote peace, culture and education in Ireland and Northern Ireland. Rooney is a champion of many charitable causes in Pittsburgh , where the family has lived since his grandfather, Dan Rooney, emigrated from Newry, County Down, in the 1880s. President Barack Obama appointed Rooney as the Ambassador to Ireland last St. Patrick's Day, and he was officially sworn into the post on July 1 by Secretary of State Hillary Clinton . Headquartered in Boston, the American Ireland Fund raises funds to support programs of peace and reconcilliation, arts and culture, education and commun
Post a Comment
Read more

The John F. Kennedy Library Foundation has elected Kenneth R. Feinberg as its new chairman. He succeeds Paul G. Kirk, Jr., who resigned as Board Chairman in September when Governor Deval Patrick appointed him interim United States Senator from Massachusetts. (Photo: Paul Kirk Jr., Caroline Kennedy and Ken Feinberg) “We are truly honored that Ken Feinberg will be leading the John F. Kennedy Library Foundation during this important time,” said Foundation President Caroline Kennedy. “There are few people who have answered President Kennedy’s call to service more often, and with greater impact than Ken. He was a beloved friend and trusted counselor to my uncle, and I am so glad to be able to continue this relationship.” Feinberg, 64, is a native of Brockton, Massachusetts. He worked for five years as an administrative assistant and chief of staff for U.S. Senator Edward M. Kennedy and as an Assistant United States Attorney. Feinberg was appointed by as Special Master of the U.S. Govern
Post a Comment
Read more

The Omni Parker House is hosting a very special wine tasting and silent auction to raise funds for the American Heart Association on Thursday, November 5, 2009. The event, appropriately named “Off The Beaten Path” will feature a very uncommon selection of red and white wines, including a Principi di Butera, Insolia, from Sicily and a Zeta Z Monastrell, Alicante 2006 from Spain. “The wines I chose for this tasting will surprise people. They are not as well known as they should be and will impress even the most educated palette”, said Frank Weber, the hotel’s Director of Wine and Spirits. The wines represent a variety of locations and are all reasonably priced on the retail market for those oenophiles looking to enhance their wine knowledge and collection. A flavorful selection of hors d’eourves has also been chosen to accompany each wine. “Off The Beaten Path” takes place in the Omni Parker House’s elegant rooftop ballroom from 6:00 p.m. to 8:00 p.m.. For more information and to purc
Post a Comment
Read more
More posts