Showing posts from May, 2014
Show all

Boston Irish Tourism Association has issued its 2014 schedule of  Irish, Scottish and Celtic folk festivals taking place  in the New England states and Quebec from June through September.   Here is the complete schedule  with information about the performers. The festival season kicks off on Saturday, May 31, with an Irish Festival of Sports and Children's Day at the Irish Cultural Centre in Canton, and ends with the new iFest , direct from Ireland, taking place at the Seaport World Trade Center in Boston. Check back through the summer to find more festivals added to this schedule. In addition, you can discover hundreds of other cultural events - music and dance, literary readings, theater, picnics and social gatherings - by visiting IrishMassachusetts.com . If you're interested in the Irish history of the Boston area, visit IrishHeritageTrail.com . For tourism information, go to MassVacation.com and BostonUSA.com .
Post a Comment
Read more

Win Tix to Amaluna from Cirque de Soleil, in Boston on June 4

Cirque de Soleil is returning to Boston, with the exciting show Amula , opening at the Boston Marine Industrial Park in South Boston on May 29, 2014. Boston Irish Tourism Association is giving away a free pair of tickets to the June 4 show. Enter the contest here , and check back to see if you won on June 2. Or, you can simply purchase your tickets now to make sure you see one of the coolest shows to hit Boston this year.  Here are more BITA contests throughout the summer. For year round information on cultural activities in New England, visit IrishMassachusetts.com .
Post a Comment
Read more

Two of New England's favorite outdoor music venues are introducing a new Irish music festival this summer, to take place at the South Shore Music Circus in Cohasset on Friday, August 21, and then at the Cape Cod Melody Tent in Hyannis on Saturday, August 22, 2014. Headliners to both shows include international fiddle star Eileen Ivers & Immigrant Soul , the  Fighting Jamesons and Celtica: Pipes Rock .  Tickets can be purchased online at  South Shore Music Circus and Cape Cod Melody Tent . Here is a schedule of Irish, Scottish and Celtic festivals taking place in New England + Quebec this summer. For year round details on Irish cultural activities in New England, as well as travel to Canada and Ireland, visit IrishMassachusetts.com .
Post a Comment
Read more

Poet Billy Collins Speaks at the JFK Library in Boston on Tuesday, May 13

Former Poet Laureate Billy Collins is speaking at the John F. Kennedy Presidential Library on Tuesday, May 13, 2014 from 6:00 to 7:30 p.m.   The event is free and open to the public but attendees are encouraged to register . Daniel Menaker , former editor of the New Yorker Magazine , serves as  moderator.  The event will also be aired live via webcast . Born in New York City, Collins is an accomplished poet who served two terms as U.S. Poet Laureate from 2001-2003 at the Library of Congress , and was also New York's Poet Laureate from 2004-2006.  He has conducted summer poetry workshops at University College Galway, and has taught at Columbia University. Collins' talk is part of the Kennedy Library Forum series , which brings leading speakers from around the world to talk about their specialties.   Find out about Irish cultural activities in greater Boston by visiting IrishBoston.org .
Post a Comment
Read more

Author Chris Klein is discussing his acclaimed new book, Strong Boy: The Life and Times of John L. Sullivan, America's First Sports Hero , at the Irish Cultural Centre in Canton on Friday, May 9, 2014 at 8:00 p.m.  The event is free and open to the public. Born in Boston's South End, Sullivan became a renowned heavyweight boxer but later had a fascinating life as a public personality, temperance advocate and sports writer.   BITA's Travel & Culture Guide described Klein's book as "a masterful, engaging biography of America's first sports superstar." The Irish Cultural Centre is celebrating its 25th anniversary in 2014 as the region's foremost Irish cultural venues.  The 46 acre facility includes playing fields, walking trails, playgrounds, and its headquarters building houses an Irish pub, lecture rooms, a library and ballroom.  Find year round details on the Irish community in Massachusetts by visiting IrishMassachusetts.com .
Post a Comment
Read more

Martin Hayes & Dennis Cahill in Concert at Blackstone River Theatre on Saturday, May 10

Irish traditional duo Martin Hayes and Dennis Cahill are performing in concert at the Blackstone River Theatre on Saturday, May 10, 2014 at 8:00 p.m.  Tickets to the show are $20 in advance and $24 the day of the show.  To order tickets call (401) 725-9272. Hayes , a native of County Clare, is one of his generation's most inventive and creative fiddlers, drawing inspiration from his locality and family, but also from a broader musical landscape that includes jazz, film scores, modern dance and bluegrass. Cahill was born in Chicago, the son of Irish immigrants from County Kerry.  He studied at the Chicago Music College, and has become one of the most innovative and in-demand guitarists in the Irish music genre. Here is a schedule of upcoming concerts at Blackstone River Theatre , one of New England's best small theaters for music.    Find year round details on Irish cultural activities by visiting IrishMassachusetts.com .
Post a Comment
Read more

Gaelic Storm The Boston Irish Tourism Association has released its 2014 schedule of outdoor festivals and concerts featuring Irish and Celtic music throughout the New England region.   The festival season runs from May through October and accentuates the region’s rich Irish, Scottish and Canadian traditions of music, dance and culture. Full details and site links on our Festivals page here . Kicking off this year’s schedule are three outdoor festivals at the Irish Cultural Centre in Canton, Massachusetts, in celebration of the group’s 25th anniversary.   The ICC’s festival on May 31 is devoted to sports and children’s activities; on June 6-7 is a weekend of music and entertainment, featuring top groups like Eileen Ivers & Immigrant Soul, Black 47, Dervi and Comhaltas Ceoltoiri.   Then on June 14 dancers from around New England will converge on the ICC for a feis, hosted by Harney Academy of Irish Dance, where they’ll compete in dance competitions throughout t
Post a Comment
Read more

Boston chef Barbara Lynch has been named "Outstanding Restaurateur" at the 2014 James Beard Foundation held in New York City this week.  The prestigious award goes to "a working restaurateur who sets high national standards in restaurant operations and ownership,” according to the Foundation. The South Boston native began her career in a local church rectory and has gone one to become one of the country's most inventive and successful chefs.  Owner of several acclaimed Boston restaurants , including No. 9 Park, Menton and B&G Oyster,  Chef Lynch is author of the best-selling book, Stir: Mixing it up in the Italian Tradition , which was released in 2009.  Lynch was also active in the Gaelic Gourmet Gala program organized by Tourism Ireland and Boston Irish Tourism Association , which paired visiting Irish chefs with Boston chefs and local restaurants during the St. Patrick's Day season.  For year round information on Boston's Irish communit
Post a Comment
Read more 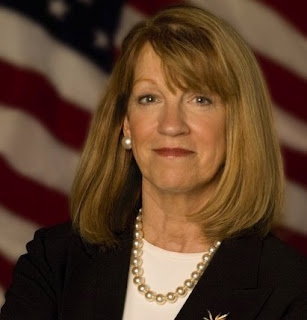 Congratulations to Massachusetts Senate President Therese Murray , who has been named the recipient of the 3rd annual Tip O'Neill Irish Diaspora Award , which is presented by the Donegal Diaspora Conference . Ireland's President Michael D. Higgins will present the award to Senator Murray in an award ceremony taking place in Buncrana in September. “I am humbled and honored to be receiving the Tip O’Neill Diaspora Award,” said Senate President Murray.  “Having the opportunity to further strengthen and create economic and academic links between Massachusetts and in the Northwest of Ireland not only solidifies our historic ties, but also allows us to build a new bridge of cutting edge technology and innovation.  It is these new connections that will help spur discovery and development, provide inspiration and opportunity, and move Massachusetts and the Island of Ireland forward in this global economy. "Where there is opportunity there is hope and where there is
2 comments
Read more

The 128th season of the Boston Pops runs this year from May 7-June 14, 2014 at Boston Symphony Hall .  The world's most famous orchestra, led by maestro Keith Lockhart , has once again drawn musical talent from around the country as it celebrates the "Very Best of the Pops," drawing from its library of 3,400 songs and arrangements by some of the world's finest composers and arrangers. This year's season kicks off on May 7 with Jason Alexander , star of television, film and stage. Alexander is the winner of a Tony Award for the play, Jerome Robbins Broadway, for which he also wrote the libretto. Here is a full schedule of performances in this year's Boston Pops season.   For other cultural activities taking place in Boston this spring, visit IrishBoston.org
Post a Comment
Read more

The Boston Irish community is coming together in force to raise medical and travel funds for Alisha Savage , a three-year-old girl from Cork City being treated at Dana Farber Cancer Institute in Boston for a rare brain tumor. The fundraiser takes place at 7:00 p.m. on Friday, May 9, 2014 at Florian Hall in Dorchester, and features an evening of live Irish music from Derrick Keane & Inchicore , Aidan Maher, Erin Og and singer/songwriter Denis O'Gorman , who serves as the MC for the evening.  A variety of raffle prizes are being offered during the event. You can donate to Alisha's fund online by visiting the Ray Tye Medical Aid Foundation . Find out more about Boston's Irish community by visiting IrishBoston.org
Post a Comment
Read more
More posts