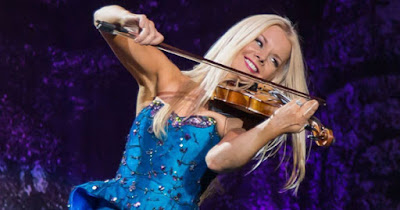 Máiréad Nesbitt, Grammy and Emmy nominated artist and composer and founding member of Celtic Woman,  performs in concert at the Irish Cultural Centre in Canton Massachusetts at 8 p.m. on Friday, July 12, 2019.

Mairead has enchanted millions of fans around the world as the featured Celtic Violinist on all 11 Celtic Woman albums, each achieving #1 slot in the Billboard World Music Chart. Blazing a solo career, Máiréad has 2 Billboard Charting solo albums, Hibernia and Raining Up. She has performed with symphony orchestras worldwide and made her 2018 Broadway debut with Rocktopia. The  New York Times praised Mairead as “a demon of a fiddle player."

Check out more cultural events at the Irish Cultural Centre this summer and fall.

Posted by irishboston.blogspot.com at 12:29 PM