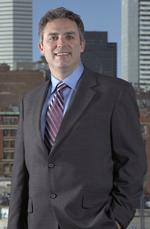 James E. Rooney, executive director of the Massachusetts Convention Center Authority (MCCA), has just been elected to a three-year term as a board director of the Professional Convention Management Association (PCMA).
The group represents the convention and meeting industry throughout the world, and has sixteen chapters in .  Based in , the 20-member board was formed in 1959.  It is considered the premier educator and professional resource for the meeting and convention industry.
Rooney was cited for “his leadership and vision” by PCMA President and CEO Deborah Sexton, who made the announcement after PCMA's annual meeting in Las Vegas.
A native of South Boston, Rooney has been with the MCCA for ten years, and was appointed executive director in 2003.  Under his leadership, has been ranked as one of the top ten convention destinations in .  Rooney has launched an initiative, t5Boston, to make Boston one of the top five destinations on the continent.
For more details on the Massachusetts Convention Center Authority, click here.
For year round cultural activities in , click here.
For visitor information, visit BostonUSA and MassVacation.