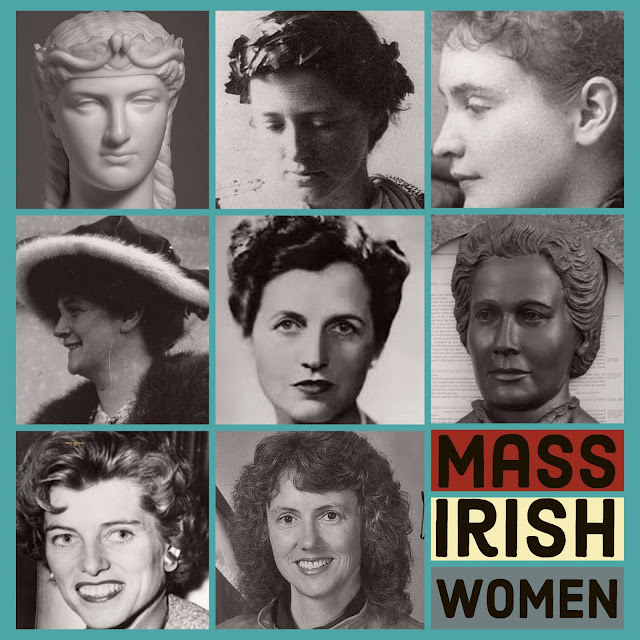 Margaret Foley
(1820-1877)
Born in Dorset, VT, Margaret worked in the textile mills in Lowell, while pursuing her interest in poetry
and art, specializing in carving cameos. In Boston she created cameos of opera star Jenny Lind, poet Henry Longfellow and Senator Charles Sumner and abolitionist Julia Ward Howe. In 1861 Foley moved to Rome, Italy and mastered the intricate art of medallions. Her work, including an acclaimed portrait of Cleopatra, were featured at the Philadelphia Centennial Expo in 1876. Her work is on display at the Smithsonian Harvard art museums.

Louise Imogen Guiney
(1861-1920)
Louise Guiney was born in Roxbury, the daughter of an Irish immigrant, General Patrick Guiney,
who was a war hero in the American Civil War. In fact, she traveled as a child with her mother to Virginia, where the Massachusetts Irish Ninth Regiment was stationed. She began publishing poems in the Boston Pilot under the initials P.O.L. with references to Latin, Greek and Medieval poetry, and readers assumed she was ‘a bright Harvard boy.’ She published a number of books, including Songs at the Start, Goose-Quill Papers and The White Sail. Her final work was entitled Happy Endings.

Mary Kenny O'Sullivan
(1864-1943)
Nationally acclaimed union organizer Mary Kenny was born in Missouri to Irish immigrants. She
worked in Chicago and New York as an organizer before moving to Boston’s South End in 1893. She organized rubber makers, shoe makers and garment workers, shops where women were paid poorly and suffered bad working conditions. When her husband John O’Sullivan died, she continued her work, creating the National Women’s Trade Union League and taking part in the Bread and Roses Strike in Lawrence, MA. The Massachusetts State House has a plaque entitled Hear Us, honoring Kenny and five other women. Click here for additional information.

Annie Sullivan
(1866-1936)
The daughter of impoverished Irish immigrants, Annie Sullivan became world-famous for teaching Helen Keller to read and write. Born nearly-blind in Feeding Hills, MA, Annie and her crippled brother lived at the Tewksbury Almshouse before Annie attended the Perkins School for the Blind in South Boston. Upon graduation Annie was sent to Tuscumbia, AL to teach the blind six-year-old Keller. Helen’s epiphany came when Annie taught her that everything had a name and could be spelled out. Their lives together were made into a movie called The Miracle Worker. Click here for additional information.

Margaret Foley
(1875-1957)
Born in Dorchester to a working-class family, Margaret grew up in Roxbury and attended Girls High School. She worked in a hat factory to pay for singing lessons and eventually began organizing women workers. She had a ‘daring personality and a voice like a trumpet,’ and wasn’t afraid to confront male politicians in public settings, relishing her nickname, the Grand Heckler. When the 19th Amendment passed in 1920, granting women voting rights, Foley went on the lecture circuit and later worked as Deputy Commissioner of the Child Welfare Division in Boston.

Rose Kennedy Fitzgerald
(1890-1995)
Rose Fitzgerald was born in Boston’s North End, the daughter of famous politician John ‘Honey Fitz’ Fitzgerald and Mary Josephine Hannon. She was raised in Dorchester and attended college in New York and The Netherlands. Considered the matriarch of America’s best-known political families, she and her husband Joseph P. Kennedy raised nine children in Brookline and Hyannis, including President John F. Kennedy, Senator and Attorney General Bobby Kennedy and Senator Ted Kennedy. Her daughters included Jean Kennedy Smith, U.S. Ambassador to Ireland, and Eunice Kennedy Shriver, founder of Special Olympics. Click here for additional information.
Eunice Kennedy Shriver
(1929-2009)
Born in Brookline, Massachusetts, Eunice was the fifth of Rose and Joseph Kennedy's nine children and the third daughter. She began her career as a social worker for women prisoners and juvenile offenders.  In 1957 she headed up the Joseph P. Kennedy Foundation, dedicated to improving the way society deals with mental retardation. Her camp for children and adults with intellectual disabilities inspired her to  create the Special Olympics, which spread to 150+ countries.  In 1984, President Ronald Reagan presented Eunice with the Medal of Honor for her life's work.
Christa Corrigan McAuliffe
(1948-1986)
Born in Dorchester, Sharon Christa Corrigan was the eldest of five children of Grace and Edward
Corrigan. She grew up in Framingham, married her high school sweetheart Steve McAuliffe, and began her career teaching. In 1984, President Ronald Reagan announced the first citizen in space would be a teacher, and McAuliffe was selected out of 11,000 applicants and began rigorous training. On 1/28/1986 the Challenger launched but exploded after take-off, killing everyone on board. Today the McAuliffe Center at Framingham State carries on the spirit of Christa by teaching students to dream big.

For more about Irish heritage in Massachusetts, visit IrishHeritageTrail.com.
To learn about cultural events in New England and traveling to Ireland, visit IrishMassachusetts.com.