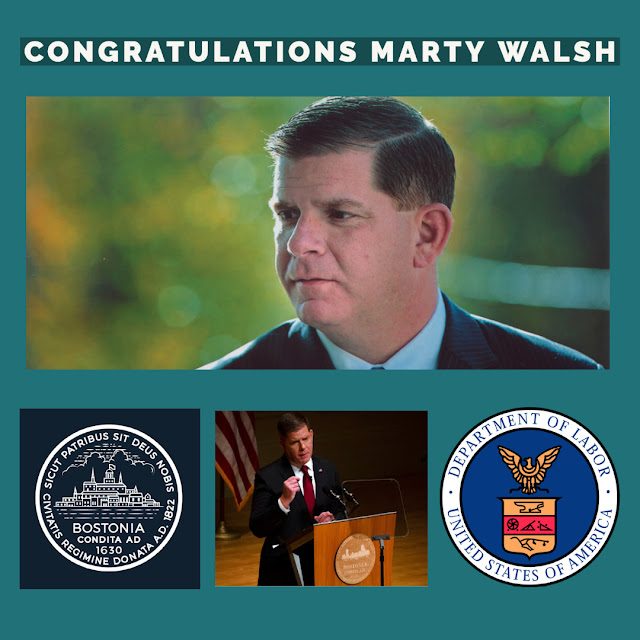 Congratulations to Martin J. Walsh, who was confirmed today as the next U.S. Secretary of Labor.  The U.S. Senate approved his nomination 68-29.
Walsh has been mayor of Boston since January 2014, and prior to that was Massachusetts state representative and a leader in Boston's trade unions.
In his farewell speech today, Walsh cited affordable housing, education, economic development, recovery services and racial equality as some of his most important efforts during his term in office. He offered that there was still work to be done, but that he was proud of how far the city of Boston has progressed in recent years.
Upon recommending Walsh for the Labor post in January 2021, President-Elect Joe Biden said, “Marty understands like I do: the middle class built this country, and unions built the middle class. He sees how union workers have been holding this country together during this crisis … [including] public service workers, fighting against budget shortfalls, to keep communities afloat.”
“Working people have been struggling for a long time, under the erosion of their rights and the deep inequalities of race, gender and class. For the last four years, they have been under assault,” Walsh said when he was nominated. “And now, we have the opportunity to put power back in the hands of working people all across this country. We can defend workers’ rights. We can strengthen collective bargaining. We can grow union membership.”
The son of Irish immigrants, Walsh grew up in Dorchester’s Savin Hill. Both of Walsh’s parents come from Connemara in County Galway. His mother, Mary, comes from Ros Cide in Rosmuc, while his late father, John, hailed from Callowfeenish in Carna. They both emigrated to Boston in the late 1950s and met at Intercolonial Hall in Roxbury’s Dudley Square, a popular dance hall for Irish immigrants at the time.