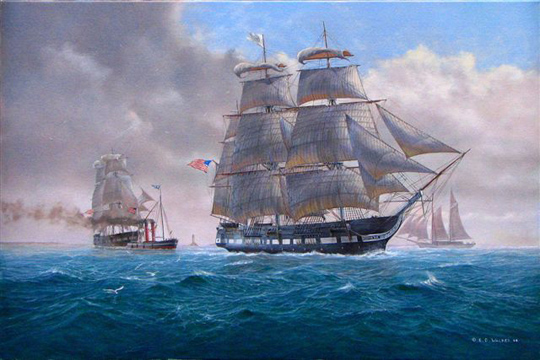 Painting of USS Jamestown, courtesy of the artist Edward D. Walker
On March 28, 1847, the USS Jamestown set sail from Charlestown Navy Yard in Boston Harbor on a humanitarian mission to Ireland, carrying 800 tons of supplies for the victims of the Irish Famine.

The mission was led by Captain Robert Bennet Forbes, a wealthy sea merchant living in Milton, MA. With Forbes on the journey were 38 crew members who had signed on to help. In February, Forbes had petitioned the US Congress for the loan of a naval ship to bring supplies, and permission to use the USS Jamestown had been granted.

As the boat left the harbor on the morning of March 28, crowds lined the wharf and the shores, cheering as the ship headed out to open seas. The fifteen day voyage faced foul weather and rain, sleet, wind and fog. The ship landed in Queenstown (now Cobh), County Cork on April 12, 1847.

Back in Boston, the newspapers enthusiastically reported on the trip, failing to note the cruel irony that became apparent when the provincial rulers greeted the crew with an invitation to a sumptuous dinner of the finest food and beverage. Forbes and his crew found this banquet most embarrassing, however, since Irish citizens lay dying in the streets nearby.

Forbes was more interested in seeing firsthand the suffering everyone had heard so much about. He was escorted around Cork by Father Teobald Mathew, the famous temperance priest. Forbes later described the event: "It was the valley of death and pestilence itself. I would gladly forget, if I could, the scenes I witnessed."

Forbes was overwhelmed by the plight of the dying, and when he returned home, arriving in the Charlestown Navy Yard on May 16, 1847, he immediately began organizing a second voyage on the USS Macedonian, another ship that Congress supplied for relief of the Irish Famine victims.

But the USS Jamestown voyage captured the world's imagination. Reverend R.C. Waterson later wrote, "I consider the mission of the Jamestown as one of the grandest events in the history of our country. A ship-of-war changed into an angel of mercy, departing on no errand of death, but with the bread of life to an unfortunate and perishing people."

- Excerpts from Irish Boston: A Lively Look at Boston's Colorful Irish Past.