Irish Famine Memorials in Massachusetts, May 16, 2021 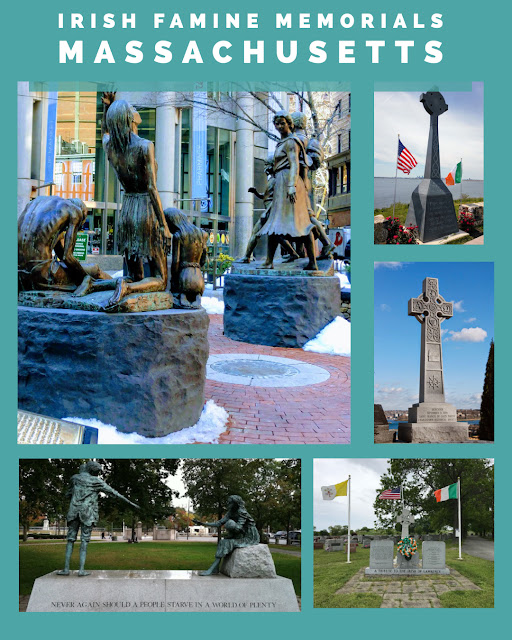 In tribute to Ireland's National Famine Commemoration ceremonies on May 16, 2021, the Boston Irish Tourism Association shares this roundup of Irish Famine Memorials throughout Massachusetts.

Many of the Irish who fled Ireland arrived at Boston Harbor, starving and sick, and were quarantined at Deer Island before being allowed to come ashore. Many of them died on the island and over 800 are buried there.  In 1847 alone, 25,000 Irish arrived in Boston, according to historian Thomas O'Connor.
Other Irish refugees arrived at other ports along the Eastern Seaboard, from New York to Montreal and St. John, NB, and made their way to Massachusetts and New England, often on foot.
A variety of Irish-American organizations were involved in building these memorials, including the Ancient Order of Hibernians, Charitable Irish Society, Eire Society of Boston, and the Lawrence Irish Foundation.  Among the community leaders who led fundraising were Tom Flatley, Michael Cummings, David R. Burke, Billy Sullivan, John Flaherty, John O'Connor, Bill and Rita O'Connell, Mark Porter and many others.
Cambridge Irish Famine Memorial on Cambridge Common/ 1997
Boston Irish Famine Memorial in downtown Boston/ 1998
Lawrence An Gorta Mor Memorial in Lawrence / 2006
Children of the Famine Memorial in Charlestown/ 2009
Deer Island Famine Memorial at Boston Harbor Islands/ 2019
Learn more about Irish history, heritage and culture in Massachusetts by visiting IrishMassachusetts.com and IrishHeritageTrail.com